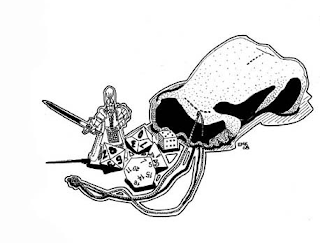 Its 1984 and my High School friends and I are scoffing at a published TSR adventure with magic shops and bartenders who were "retired adventurers" of 10th level or even higher.

Why wouldn't any magic shop immediately be a top priority on the hit list of every Lich, Dragon and major bad guy within a thousand miles?

How were the player characters, supposedly the heroes of the current campaign, supposed to feel remotely heroic if every Joe bartender and Sally shop keeper was a retired adventurer of a high enough level to easily thwart whatever adventuring task was at hand?

Today, the Magic Shop has become a staple in many published settings and high level shop keepers are running half of the blacksmith shops, taverns and emporium within a hundred miles.  How did we get to this state?  My High School friends and I and I suspect many of you who were playing D&D in the late 1970's through the 1980's used to look with absolute disdain on the appearance of a bonafide Magic Shop in a homebrew campaign as a sure red flag that the campaign was going to be another "Monte Hall" affair and not the sort of game we were hoping to play.

Nearly as bad was the bar fight which ended when the NPC, 10th level retired Fighter took his +3 magic sword down off of its place of honor above the bar and obliterated the party Half-Orc for breaking one of his chairs over the head of a patron who had accused him of cheating at cards.

"That guy is supposed to be off building his own keep somewhere on the frontier", we protested.  What the heck is he doing cleaning mugs and pouring out ales for a couple of gold pieces a day in some back water village at the ass end of nowhere?

The creep of high magic and high level characters populating the published campaign worlds of the Dungeons and Dragons universe had begun in earnest.

So, how do you sell magic items your party doesn't need or want if you don't have a magic shop which buys and sells magic items routinely in every major city in the campaign world?

Easy.  You offer to sell them to one of three places.  The Temple, the Guilds or the Underground.

Guilds are another good bet for selling off undesired magic items.  They may not be located in every large city but a Magic-User's Guild will usually offer 80% to as high as 90% of the listed value for magic scrolls, wands, staves and items useful to their members.  The Magic-User's guild is also a good place to sell off valuable components you might have gathered during your adventures.  Valuable gems, jewelry and the strange poison sacks, fangs, tails and hearts of monsters you've decided to stick into jars and haul out of the dungeon might find a buyer at this guild.

The Fighter's Guild or local Mercenary company is another good place to sell the martial types of magical items.  As a general rule a Fighter's Guild is not as flush in coin as the Magic-User's guild and so you can expect to be offered 50% to 75% of the value of a useful item.

Last on the list is finding a connection to the underground markets, the slimy under belly of the campaign city.  With the right Fence you can sell almost anything through the Underground market but don't expect to receive a fair value for your hard won loot.  The Underground will offer you anywhere from 25% of the value of an item up to, at the very maximum, 50% of the listed value of any magic item.  Remember, the Underground market may take some time to find a buyer for your magical item and the middle men in the transaction all need to put a little coin into their pockets along the way.

When it comes to high level NPC characters, my recommendation is that you keep the common folk, common.  The vast majority of the population in any village, town or city is the common, zero level variety of their race pulled straight out of the monster manual.

Let's establish some guidelines for how numerous certain NPC character types are within your campaign world.  For the purposes of our example we will stick with the Fighter character class.

1st Level Fighters     Some of the City Militia and Royal Guard are 1st level Fighters.  Perhaps as many as 50% of the entire force is made up of this power level of character.
2nd Level Fighters    Tougher Hired Guards for shops which trade in valuable goods.  City Guard members who are corporals or sergeants in the ranking structure.  A half dozen freelance adventurers for hire might be available at this level in the entire city.
3rd Level Fighters     Commanders of local brigades of the City Militia, Sergeants within the Palace Guard, the personal bodyguards of important NPC personalities within the city may be of this level.
4th to 5th Level         Captain of the entire city guard.  The personal bodyguard of the King. An instructor at the regions Fighter's Guild Hall.  Your Fighter that decides to settle down and buy an Inn to operate instead of trying to climb the ladder of power into the nobility is usually from this tier in the Fighter class level scheme.
6th to 8th Level         Head of the region's Fighter's Guild.  Captain over the guard for a large temple of one of the richest and most powerful and influential religious sects in the campaign.
9th and 10th Level    9th and 10th level Fighters have risen to such a height of influence, wealth and prestige that they are widely considered to be a member of the lower noble class.  These characters are usually working to establish Keeps, Forts and other strongholds at the borders of the Kingdom.  They may carry the title of Knight and be called by the title of Sir.  These characters can meet out the King's justice in lower court cases within the territory of their established Keep.
11th to 15th Level      This is a rank rarely achieved by an adventurer but characters of this power level are often granted a permanent rank and title within the government of the Kingdom.  They might be declared to be a Duke, Baron or similar title.