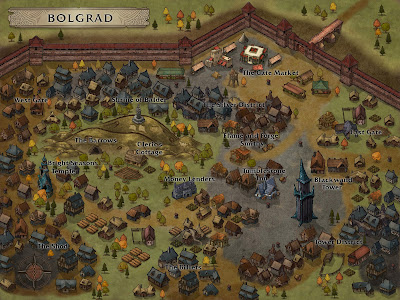 Bolgrad is the only significant town on my current adventure map.  There are several other smaller villages, much smaller really compared to Bolgrad and I plan to do these Inkarnate maps for each of them.

Bolgrad is situated on a tall plateau left behind by the activity of glaciers in the region hundreds of thousands of years ago.

Within the walls of the town there is a substantial hill.  The hill is the highest point on the plateau and it has steep grass covered slopes leading up to a stone statue of the Northern god Balder, the god of warriors and heroes.

Within the hill and below the town in the limestone rock of the plateau, there is a substantial network of natural caverns.  The caves closest to the surface and entered through a large cave mouth on the South side of the hill, have been used as burials for the people of the town since it was established, two hundred years ago.

Bolgrad is the major trade center for the surrounding lands.  The next closest substantial town of this size is the Warhold of King Gudbrand, roughly forty miles to the Southwest.
Posted by Edward Kann at 11:17 AM