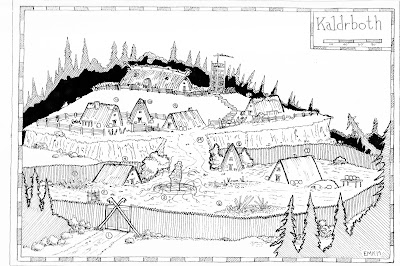 Taking on some amazing cartography jobs.  Including one for Mr. Rob Kuntz.  I had to shuffle around my daily schedule a little bit.  Right now I have three hours set aside per day for meetings, cartography and art for my own book projects.  I have two hours set aside per day for a Kickstarter project some friends are working on and a block of three hours to work on Rob's and the occasional request for a custom map I pick up from players.

Then I take a bit of a break and come back in the evening for about two hours of just writing on my own book projects.

So ten hours a day of awesome RPG writing, meetings, cartography, drawing and all sorts of sundry other oddments (building a company website being one of these).

As things ebb and flow I will probably jump in a sixth day on the busy weeks and ease back to four day work weeks when things slow down.

Speaking of cartography.  Hey!  I make maps for Gamers and Publishers.  I can do a very solid and nice OSR style hand drawn map or ISO map or I can do a very professional digital map for your project or for your personal campaign.  Want a 18x24 hand drawn, inked and colored - beautiful map on parchment of your personal campaign world or favorite fantasy city?  Give me a shout.  Having some custom maps of your world to hang up on your wall can be pretty awesome.

Today's village map is number two in a string of village and town maps I am cranking out for my own campaign and adventure projects.  This is the remote village of Kaldrboth Steading.  This village has seen even more trouble than Kalbeak which is closer to the border of the woods and further to the South.  Here the villagers have holed up in the higher levels of the settlement, building barricades and largely abandoning the lower level of the village where three of the family dwellings are nothing more than burned shells and rubble.

Next week I'm picking up an art scanner with a large scan bed!  Its about time.  I have enough cartography and illustration stuff going on to finally justify the added expense.  Really excited by this development.
Posted by Edward Kann at 4:08 PM