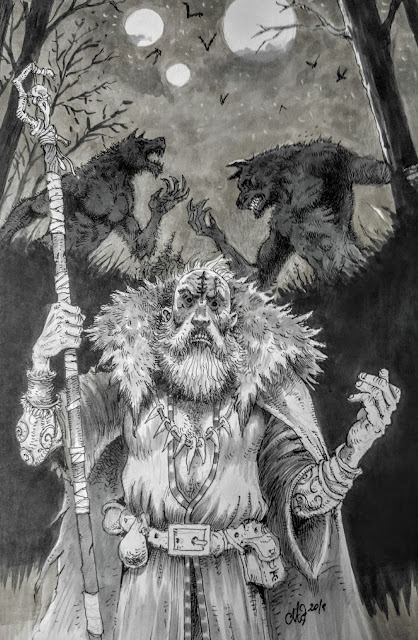 I have been writing on my Kingdoms Chimerical or World of Chimera D&D campaign for a long, long time.  Over the years I have had a lot of fun fleshing out some of the dusty corners that often get forgotten in homebrew worlds and one of these is creating your own fantastical plants for your game world.

As some of you already know, two factions of Druids wrestle over power in the Warholds of the North.  These are the Ragged Cloak Druids, who are lycanthropes and The Druids of the Henge, which broke from the traditions of natural magic and were seduced by the Dark, Cosmic Sorcery of the Kingdom of Asmorgar.

All of this comes out of writing up a world over many years which includes notes about whole varieties of plants and herbs which have direct interactions with the world around them.  In Chimera you can sometimes tell that an undead creature has risen in a graveyard because the presence and properties of certain plants will tell you this.  A knowledgeable player character, someone playing a spell caster with an interest in lore and occult knowledge will pick up in real player knowledge what plants grow where, and why.  They can look around the natural world and get clues about what has been happening in an area or at the very least find interesting and useful specimens for brewing their own herbal concoctions.

Chimera has three moons and a wheel of stellar constellations which directly interact with the ancient standing stone circles scattered around the world.  Reading the sky can tell you whether a ley line of magic is waxing or waning or whether a new branch may be appearing or an old area of magical power fading.

I have a long list of many herbs and plants from my Dragonsmarch adventures over on my campaign web page.  The Dragonsmarch is the heartland of my world of Chimera, made up of the Kingdoms of Daria, Etruria and Kyrene.  For the last year or so I have been working hard on adventures more in the North, in the lands of the Warholds of the Northmen and because of this I have greatly expanded upon the original list of herbs and plants written for the heartlands area.  Unfortunately time being what it is, everything is a balancing act of deciding where you invest your time.  Do you focus on the book(s) you want to get out for the North?  Do you write the blog?  Do you update the old campaign website?  Everything has to be done with a certain care for priorities.

Here are some glimpses into some of the herbs and plants I've made up for my world.  At the end of this short sample list I will include a link to the Dragonsmarch list of herbs and plants which has simple rules for what happens when you combine them at the bottom of that page.

Butcher's Grass grows in broad sharp stalks often as tall as a man's hip. The edges of these sturdy blades of grass are a light green but the center of the grass stalk in a deep red growing more black in the center. Butcher's Grass grows native in the far East, in places like The Necrogarchy of Leng or the Ancient Kingdom of Petrurias. It is believed that seeds of this grass were carried in the rotted armor and rotten clothing of the undead army driven into the Kingdom of Daria by the Necromasters during the Nightshade War. Today Butcher's Grass can be found in scattered patches wherever the ground is soft and damp and where shade is abundant. Butcher's Grass does not grow in dry or sunny locations well.
Butcher's Grass is tough and resists cold and even the heat created by a natural fire. Harvested with a scythe it can have the sharp edges trimmed away and be woven into sturdy baskets or twisted to create fibers for making rope.
Butcher's Grass has a reputation for growing where a considerable amount of blood has been shed, usually through some violent deed. It is believed to commonly grow around gallows or in patches where battles have been fought.
Herb Lore - When boiled Butcher's Grass releases an agent which can add to the potency of salves and potions which heal wounds. Herbal wound salves and potions generally add 1 or 2 points to the rate of natural healing over the course of a full days rest with limited or no physical activity.
Value: 1 Gathering = 3 to 5 plants = 3 silver pieces.

This plant has broad leaves like a fern but covered in a light fuzz. The plant remains green most of the year until well into the winter when it becomes dormant and its leaves and stems die leaving only the roots intact to regrow the next spring. Bar Weed can be identified from other ferns because of the soft velvet feel of its leaves and the slightly purple sheen the leaves have when turned in the light. Bar Weed stalks are edible and have a satisfying crunch like celery. The roots of the plant are also edible and have a peanut flavor. Bar Weed roots are sometimes used in cooking. The leaves of the plant can be left in a jar of water out in sunlight for a day and they will turn the water into a potent tea with very nearly but not quite exactly the same flavor as a cheap American beer.
This tea can be left to sit for several days and it will ferment slightly becoming a weak alcoholic beverage popular among local farmers and small villages. In most places the drink created with Bar Weed is known as Weedle. The halflings in particular are fond of brewing up batches of the stuff as Bar Weed grows wild and can be found almost anywhere in the Shire. Family secret recipes are closely guarded and might include berries or potatoes or even bacon for flavor.
Most taverns in the Dragonsmarch keep at least a barrel of this poor man's ale handy. A tankard of Weedle sells for 5 copper coins on the average while a tankard of proper beer or ale will usually run a full silver coin. In the large halfling village of Kettlebee there are annual competitions which involve the baking of pies, stews, the brewing of all manner of drinks including recipes of Weedle.
Value: 1 Gathering = 5 plants = 1 silver piece. One gathering of Bar Weed is sufficient to brew five gallons of Weedle.

This strange fungus grows like a cane plant but in caverns. The stalks grow about three inches every hear but the fungus is very hard and sturdy like bamboo. Air currents which blow over the open holes and tubes of this cavern dwelling fungus create soft whistles and moaning noises sometimes attributed to monsters or a ghostly presence. Cave Whistle can be cut with an axe or other sturdy chopping implement. Left to grow long enough the stalks of this plant can grow up to fifteen feet in height. Subterranean dwelling intelligent races have used Cave Whistle as an underground substitute for wood when crafting items, constructing huts or underground buildings.
1 Gathering = 3 feet of cane stick = 1 gold

These inedible berries are a bright lemon yellow in color. They produce a strong smelling paste when crushed which can act as a repellent against giant centipedes, giant ants, giant spiders and even the dreaded carrion crawler. Goblins and Orcs sometimes cultivate bushes of the stuff to use in keeping dangerous creatures away from their tunnels. The down side of this goop is that it produces a very strong reek detectable to even the nose of a human out to a distance of 120 feet. The odor produced has been compared to that of a wet dog rolled in a pig trough and then pelted with cow dung. In short the stench is very close to the smell one detects commonly in an orc or goblin lair.
The creatures repelled by this berry will retreat to a distance of at least 120 feet and will avoid making contact unless attacked.
1 Gathering = 1/2 Pound of Berries (Usually 20 to 30) = 2 Silver Pieces

This is a strange tree with a leafy appearance bred by magic to consume the slight negative magical aura generated by darkness rather than sunlight. The trunk and the branches of this tree are bone white and smooth, they grow slim and crooked. The upper side of the leaves of this tree are a dark purple and the underside of the leaves are a dark red. It is said that the Elves created these trees for gardens built deep underground, for reasons which are now a mystery even to the greatest minds. Dwarves dislike these trees and say that they attract the presence of evil wherever they are found. Dwarves complain that the roots of these magical trees are corrupted and that they weaken the stones in the area where the trees grow.
Darkling Trees are found in strange areas deep underground, in the darkest areas of the deep forest and sometimes in the ruins left behind by the civilization of the Elves.
1 Gathering = 1/2 Pound of Wood = 10 Gold

The Elder plant is a green shrub favored for gardens because its branches grow together in a dense fashion which allows the plant to be easily pruned into amusing sculptures and shapes. The root of this bush can be crushed, chopped and dried. The dried form can be brewed into a tea which soothes headaches, eye strain and helps the user relax. Elder Root tea is favored by sages, wizards and other characters who spend long periods of time each day reading or studying.
1 Gathering = 1 Plant / Roots = 3 Silver Pieces

A Gallows Slipper is a flowering plant with a structure very similar to that of a common daisy but with violet petals so dark as to appear very nearly black. This wild growing flower is sometimes worn in the hair on tucked into the button hole of common folk on their way to a funeral or during somber religious observances. Condemned criminals sometimes have wreaths of these flowers delivered to them prior to their execution. In the Kingdom of Etruria and in other places laurels of woven Gallows Slippers are put on the heads of individuals shortly before they are hanged.
Gallows Slipper grows wild in field country or in and around cultivated lands. It can be found in areas of light forest growing at the base of trees or along roads next to stone walls or fences.
1 Gathering = 10 Plants = 2 Silver

Graves Blanket grows in masses of pretty white flowers about the size of a person's thumb. These flowers are planted in and around graveyards because they change from their usual white color to an unmistakable purple coloration like that of a deep bruise whenever they are exposed to negative or necrotic energy, the sorts of energies usually associated with undead. Those who tend to graveyards use these flowers as a sort of detection against the presence of undead who may be drawn into the area seeking a hiding place or for some other nefarious reason.
1 Gathering = 3 Plants = 3 Silver
Plants and Herbs - World of Chimera
Posted by Edward Kann at 5:00 AM