D&D is not a storytelling game... 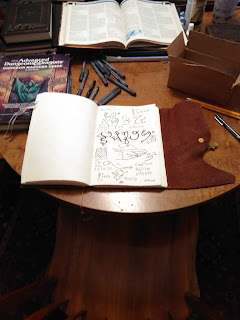 If you are a fan of shows like Critical Role, you might easily be under the impression that Dungeons and Dragons is a storytelling game.

I should preface this by saying that I have enjoyed the heck out of Critical Role but I realized early on that it is a scripted show with actors and a more or less predefined end point.  I love the actors involved.  Matt Mercer runs a great game of 5th edition D&D but the show and others like it should not be confused with running an actual live campaign of dungeons and dragons.  Critical Role would be in a very unfortunate position if the dice rolled poorly one episode and they experienced a TPK only three shows into the new season.  Likely they start out with a known beginning, Matt has a clear idea of where the story should go, the actors follow his lead and do not deviate from the course he has set out for them.  Along the way the voice actors play D&D more or less and engage in some hilarious and fun improvisational theatre.  Towards the end of the show though everything has to get steered to the predefined end point for that particular episode, otherwise the whole thing would never work.

In a real D&D campaign of any edition are there stories to be told?  Absolutely.  Every DM writes up histories, mythologies about the gods, details about magic and how it works in their campaign or at the very least writes up a brief history of the dungeon to be explored or outlines the encounter or mission at hand.  This is all pre-game story.  When the players arrive, pick up their character sheets and their dice however, the DM steps out of their role in writing pre-game story and turns the reins over to the players.

What happens next is that the players explore the world, the adventure module, adventure book or the encounter that the DM has laid out for them.  The players may decide to go into the haunted tower next to the starting village, or they might not.  They might decide instead to become a group of highway bandits or they might strike off into the wilderness to explore and see what they might find in a nearby forest.  Story is happening...and the players are in it but the DM is not telling or driving the story.  The story has become whatever the player characters decide to engage in during that night's game.  The story has become what they will retell their friends and reminisce about with the other players, twenty years later about the fun they had exploring and roleplaying their characters in the DM's world.

There are roleplaying games specifically designed to be storytelling games.  Dungeons and Dragons is not one of them and has never really been constructed to be that sort of experience.  Dungeons and Dragons is about immersing your imagination in the fantasy world your character is in.  It is about exploring that world and overcoming great obstacles.  Sure...there can be a ton of lore or back story all throughout the campaign but when play begins, the DM stops being the one to drive and write the story and everything is turned over to the players.

The DM should never come to the table with a strictly linear game leading the players by the nose from encounter to encounter and always to the same plot ending no matter what happens.  Well, ok they can, and many do exactly that but that can be the worst possible style of DMing imaginable, especially when you have experienced the other kind.

Being a DM, drawing maps, populating the maps, writing up interesting and compelling NPC characters and populating your maps with all sorts of histories and encounters, treasures, traps and other wonders is a demanding task.  A good DM who is running their campaign, not just off the cuff but with some deliberate thought and preparation; can easily spend days, weeks or even months preparing everything so that the player characters can immerse themselves.

In the old days you used to describe how you'd search the hall for pit traps.  If you found a chest you'd cautiously test it for lethal spring devices and when you opened it, you were careful to describe to the DM that you were not standing right in front of the thing.  If you had to climb a wall but you didn't have a dice roll to fall back on, you asked the DM to describe the wall.  Was it perfectly smooth?  How steep is it?  Are there any obvious hand holds?  Can I jam some iron spikes into the cracks to help me climb it?  OK, I take off my plate armor because that isn't going to help me, secure it in a bundle and tie it off with a rope so I can haul it up behind me once I'm up.  Over the years the game has evolved from an open system, or mostly open system (thanks Rob Kuntz for clueing me in on this reality) to a closed system.

With everything codified now you just roll to climb a wall or search a hall or check for a trap.  All of that glorious immersion and detail where you placed your imagination into the center of a world full of wizards and dark dungeon corridors is a weak shadow of what it once was.

It turns out that Dungeon Mastery is not for everybody and indeed there are damn few DM's who invest more than a handful of hours in preparing for their campaign.  This is unfortunate because investing some real time and hard work into your world can be very entertaining and rewarding, easily as much fun as playing the game itself.

That's all for tonight.  See you on the flip-side tomorrow.