The Village of Langerklif - Village #3 Done

This morning was busy.  I was having trouble sleeping, which sometimes happens guys when you hit your 50's, so I was up at 5 am.  I got a good hour of writing in before waking up my teenagers to get them ready for school.

After getting home I put in a good hour and change on a client map.  That's a large project and in color so I am chipping away at it an hour or two a day.

After that and some coffee I broke open village map #3 and managed to take it through from blank paper to finished before lunch time.  Listening to some YES helped keep my brain in creative, imagination mode without need to take a break.

There are three isolated villages within the Old Woods and this is the one furthest up the trail from the main road.  Despite being the most remote it has better water access and receives a little more traffic from boats moving along the coast.  Because of this it has a fairly good sized Inn, constructed on a raised area of reinforced stone and masonry laid over a section of logs, driven into the top of the cliff to protect the whole thing (at least a little) from the cliff degrading over time.

At the base of the cliffs is a natural cavern where the villagers sometimes store goods intended for trade with the passing boat traffic.

Unfortunately the horrors at work in the surround forest have so far managed to create wreck and ruin on the entire Northern third of the village, where none of the structures remain standing.

The Northmen in Langerklif are sturdy and while they have been beset by the evil plots of the Druid for the longest they have managed to weather it all a little better when compared to its neighbor to the South. 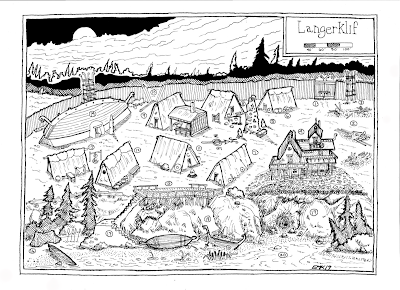